The Inishowen Traditional Music Project was established in 1999. From the beginning, Willie  Bonner was a wonderful supporter of the project attending many of the concerts and sessions in Glengad Community Centre and in Mc Grory’s of Culdaff as well as many other singing and music events in the Inishowen Peninsula.

In acknowledging the passing of our good friend Willie Bonner we asked his niece Mary Bonner originally from Boston ,USA  to write the following words about Willie.

Inishowen has lost one of its most loyal music supporters, with the recent passing of Willie Bonner of Portaleen, Malin.

Willie was my uncle. He was a warm, wise and highly respected man.  People came from far and wide to ask for information and advice about boats.  There was nothing about boats Willie did not know.  In recent years, he participated in the building of traditional curraghs, mentoring the group with his knowledge and utilizing his skill of working with his hands.

Throughout his life, Willie travelled extensively throughout Ireland, North and South, as well as Scotland and England.  His destinations were predominantly port towns and fishing villages.  As for places in the world he hadn’t visited, he most certainly read about them.

Any time I was making travel plans within Ireland or the UK, Willie recommended wonderful places to visit.  I fondly recall a conversation we had before I set off for a tour of the west coast of Scotland, which included a visit to Iona.  Willie described the tranquil and mystical atmosphere of Iona.  To my astonishment, I experienced the same during my time there. We agreed later that neither of us had ever felt anything like the peaceful sensation experienced on Iona. I am so glad we shared this special experience, even though we didn’t visit Iona together.

When it came to travel or anything else, he never steered me wrong!  I am  certain that there are many other who people would be able to say the same about Willie.

In addition to his love of boats, his respect for traditions such as the curraghs, his skill of working with his hands, and his natural interest and curiosity about the world, Willie loved live music.

For many years, Willie was a familiar face at the Inishowen Singing Weekend in Clonmany.  He would also be found at story-telling, art exhibits, plays and especially the music sessions every year since the first Charles Macklin Autumn School in Culdaff in 1990.

He had a genuine appreciation for Inishowen’s local musicians – Tom Byrne,  The Henry Girls and so many more.   He also took special pride in his talented neighbours, Paula and Melanie Houten.

Whenever Mary Black sang in McGrory’s, Willie and I were there.

Willie and Mary at Altan’s Concert 2011

For many years, we looked forward to our annual night out at the Altan concert between Christmas and New Year at McGrory’s in Culdaff.  No matter how bad the weather and the roads were, Willie was a steadfast member of the audience every year since Altan first played in McGrory’s.

However, Willie’s favourite nights were Fridays in McGrory’s Front Bar.  He would settle into his usual corner seat inside the door. He would take his cap off, fold it and rest it on the seat back behind him.  Later, I would know it was time to go home when the cap was lifted and unfolded.

Willie preferred the quieter nights.  When the bar was crowded and the conversations got loud, he would lament in the fact that there was beautiful music being played in the corner and he could not hear it.  He relished the quiet nights when he could see the fire, say hello to a few familiar faces, and hear the music he loved so much.

Willie was always glad to see Mick Denieffe come through the door with his accordion case and Roisin McGrory with her fiddle, along with John McGrory and often a variety of other musicians who turned up on the night.

Willie loved all the music – the slow melodies and the lively tunes.  But he would always wait for one piece of music in particular,  Ashokan Farewell .    Our conversation stopped as a look of serenity crossed his face when he heard “his song” – always played so beautiful by Roisin McGrory.   Now and then, he would mention, in a calm and matter-of-fact way, that it was the music he wanted as he was escorted from the chapel after his funeral.

So when that day arrived, 21st September 2013, the gifted musicians – Roisin McGrory, Mick Denieffe, Melanie Houten and John McGrory –  whose music he enjoyed countless times over the years-  paid a wonderful tribute to Willie Bonner with one final music session to send him on his way.  And at the end of the service, Willie got his final wish;  Roisin played Ashokan Farewell, the beautiful and bittersweet melody he cherished. 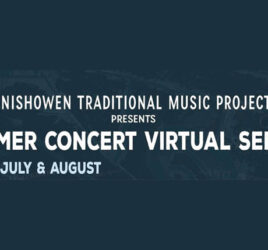 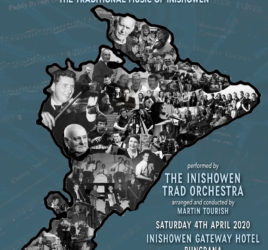 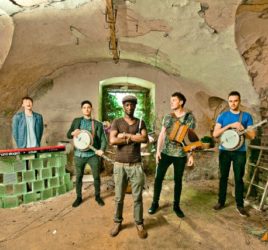