Kevin was born in Belfast in October 1936 into a musical home. His father was the author Michael MacLaverty and his mother Molly was a great singer and pianist. Kevin spent his early childhood years in Strangford Co. Down and it was here that his passion for all things maritime began. His mother attempted to teach him piano at a young age – unsuccessfully, as many stories were told of how he tried to wriggle out of his lessons. Molly’s efforts eventually paid off though, as he returned to music during his college days, taking up the tin whistle. It was after hearing the piper Sean McAloon play in 1964 that Kevin was inspired to take up the uilleann pipes himself.  He went on to compete in various Fleadhanna in duet competitions with the renowned fiddler Kathleen Smith.

Kevin moved to Moville in 1978 after taking up the job of Director of the National Fisheries School in Greencastle. In the early 1990’s, he was one of the founder members of the Comhaltas Cois Feabhail Branch which was based in Moville. They held monthly sessions and tin whistle classes and this helped reignite the interest in traditional music in the vicinity.  He took up the traditional flute around 1990 and this was the instrument most associated with him in sessions. He was inspired by the lilting music of South Sligo and made many lifelong friendships with flute players from that area – especially the late Peter Horan.

Unfortunately Kevin died suddenly in December 2002 but the legacy he left behind is greatly appreciated by the people of Moville. His daughters Eimear and Aoife are carrying on the musical traditions locally and the MacLaverty House still has a welcome for musicians far and wide.

The small flame that Kevin started in 1990 has been fanned and his place has been cemented in Moville’s musical journey. He is sadly missed by his family and fellow musicians, particularly those with whom he played with regularly such as Sean McCrystal, Daniel Harkin, Paddy McLaughlin and many others. 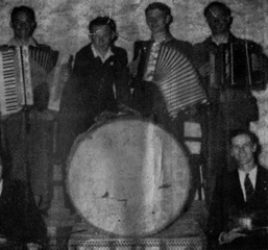